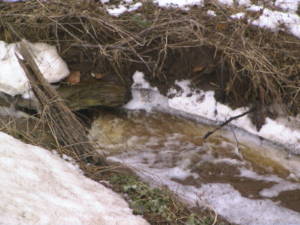 What is a CAFO?

A CAFO, or Concentrated Animal Feeding Operation, is an industrial-sized livestock operation

What pollutants do CAFOs produce?

CAFOs produce enormous amounts of animal waste and other pollutants. CAFO owners and operators spend millions of dollars on technologies that make it possible to produce massive quantities of milk, eggs, and meat, yet they often resist investing in technologies and practices to properly treat the wastes that are by-products of this industry:

In addition to plant nutrients like nitrogen and phosphorus, CAFO wastes are likely to contain: CAFO waste is often stored untreated in gigantic anaerobic waste storage structures or pits for up to 6 months. After storage it is spread on farm fields for disposal and ‘beneficial reuse.’ This is where CAFO wastes often enter and pollute surface water. Nutrients in CAFO wastes can cause algae blooms in ditches, streams and lakes. These blooms deplete oxygen levels and can lead to fish kills.

How do CAFOs impact human health?

CAFOs may cause health effects to their neighbors from pollution damage to the air, land and water.

How are CAFOs regulated?

Federal laws establish minimum standards for the regulation of any activity that causes air pollution or water pollution. However, via extremely aggressive lobbying by CAFO promoters, federal laws for the environmental oversight of CAFOs are very weak. The federal Clean Water Act does provide some regulation of CAFOs, although interpretations of the extent of those requirements are being litigated. State laws must be at least as restrictive as the federal law, but in Pennsylvania and some other states it has required citizens to bring challenges to state’s delegation under the Clean Water Act to force the agencies to implement the laws. Federal law requires that any CAFO which has had an illegal discharge into surface waters must obtain a National Pollutant Discharge Elimination System (NPDES) permit in order to continue operations.

State and federal agricultural agencies often play a role in establishing voluntary standards that CAFOs and other livestock operations are expected to abide by. In some instances, the agricultural agencies will act as the gatekeeper for securing any enforcement actions by the state, particularly in the area of air pollution. In PA, for example, County Conservation Districts support the Dept. of Environmental Protection’s oversight of agricultural compliance. Unfortunately, County and State officials are often overworked, understaffed, and unmotivated to enforce the few vital rules on Pennsylvania’s books, thus the need for monitoring, advocacy and enforcement by Lower Susquehanna RIVERKEEPER.

In January 2009, we joined PennFuture in sending 5 Notices of Intent to file suit for unpermitted CAFO’s. Three of the operations, Brinton, Forry and Lefever, have agreed and are now getting their permits. The fourth, Ebaugh, claims they never had enough animals to trigger the permit. This is debatable, but without further proof there is no requirement for a permit. We will keep an eye on this operation. The fifth, Strickland, claims that there are two separate operations, thus not requiring a permit. This is a point of concern for us and DEP, and this may lead to further action.

We have reviewed the proposed Gemmill CAFO in Muddy Creek watershed in York County, as well as the Marstellar farm, a large operation that may slip under CAFO permitting requirements, but is still of concern to the Muddy Creek watershed. Temple University at Harrisburg’s GIS class is working on a CAFO mapping and tracking system to be shared with other concerned agencies.

Likewise, one of our priorities is systematically analyzing Pennsylvania’s CAFO regulations to assess their consistency with minimum federal standards. This effort is especially important as part of the battle in enforcement is making sure good law that adequately protects human and ecological health is on the books!

We continue to document CAFO’s and their activities. Please, contact us immediately with any concerns via our Pollution Hotline!